Call Reluctance: What It Is and How to Overcome It 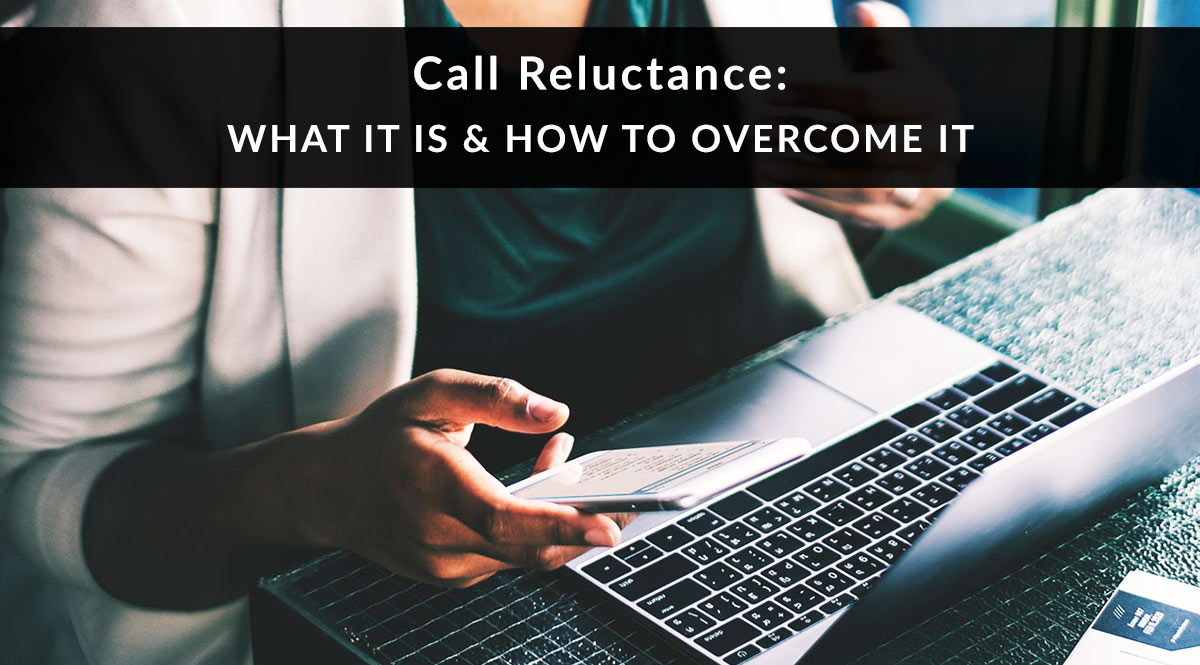 Call reluctance: the struggle is real. On one hand, your career depends on prospecting. On the other hand, you have serious doubts about your readiness or what your prospect will think of you.

That doubt is often enough to keep new and experienced agents from picking up the phone. Even worse, if you do make the call, that doesn’t mean the doubt is gone. Oftentimes, it’s still there, lurking beneath your words, making you talk too fast or get tongue-tied as you deliver your sales pitch. Isn’t there a way to keep this from happening?

First, let’s start by saying that this happens to nearly everyone—even experienced advisors, as we’ll see below. To get a better understand of what’s happening, we need to look at the different types of call reluctance.

As it turns out, “call reluctance” is not a one-size-fits-all description of the problem. In The Psychology of Sales Call Reluctance: Earning What You're Worth in Sales, George W. Dudley and Shannon L. Goodson identify and describe 12 types of call reluctance.

When it comes to insurance, the authors dug deeper and tried to figure out which of these types was the most prevalent. After studying 2,110 insurance salespeople, here’s what they found:

MDRT vs. a Control Group

Dudley and Goodson also did the big MDRT Call Reluctance Research Project back in 1988. Yes, that was a long time ago, but since call reluctance hasn’t gone away, it’s valuable to bring back these results for a second look.

In this study, Dudley and Goodson gave participants a questionnaire, scored and examined in terms of age, time in the industry, and MDRT commissions category. A control group contained other insurance salespeople of roughly the same age and time in the industry who came from different agencies and who didn’t qualify for MDRT.

Here’s what they learned about the top three forms of call reluctance in the insurance industry:

And although the following types of call reluctance aren’t in the top three, they show an interesting difference in the way MDRT members approach the job:

One thing is clear – call reluctance happens to everyone. As Dudley and Goodson learned, about 40% of veteran salespeople will experience periods of call reluctance that are bad enough to threaten their future as a salesperson, no matter how many years of experience they have.

As many as 80% of all salespeople who fail within their first year do so because of insufficient prospecting activity.

There’s also an anecdote from Dudley and Goodson that may make you feel better. The authors describe two insurance agents they met during this study. The agents’ business cards represented the difference between them. One agent’s card read “Senior Financial Services & Estate Planning Advisor,” followed by a list of credentials and degrees. The other? It simply read “Insurance Agent.”

Guess which agent was a member of MDRT? It was the one with the simple “Insurance Agent” tagline.

This is proof that people need insurance. They want to buy it to protect their loved ones. There is no shame in helping them learn more and decide whether what you’re offering is right for them.

How to Overcome Call Reluctance

So now we know what it is, but how do we stop it? There are quite a few books, programs, and seminars available, but before you sink any money into them, try these common-sense tips.

That’s our look at call reluctance and how to overcome it!

What are your experiences with call reluctance? If it's affected you, how did you overcome it? Tell us in the comments - and reassure others reading that they're not alone.